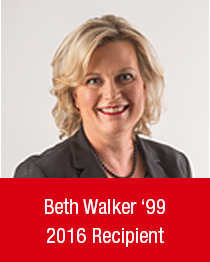 Beth Walker practiced law statewide in West Virginia for more than 25 years, first with the Bowles Rice firm and than as Associate General Counsel with the West Virginia United Health System, Inc. (WVU Medicine). On May 10, 2016, she was elected the first nonpartisan Justice of the Supreme Court of Appeals of West Virginia for a 12-year term beginning on January 1, 2017.

Beth is a 1999 graduate of Leadership West Virginia and subsequently served as member and chair of its board of directors. She is a long-time member and former chair of the board of Girl Scouts of Black Diamond Council.

Beth lives in Morgantown with her husband Mike Walker, a 2001 Leadership West Virginia graduate and former member of its board of directors.