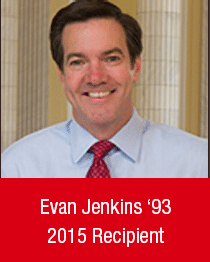 Justice Evan H. Jenkins was appointed to the Supreme Court of Appeals of West Virginia by Governor Jim Justice on August 25, 2018, and took the oath of office on October 1. Justice Jenkins was elected on November 6, 2018, to fill the seat vacated by the retirement of Justice Robin Davis until the end of that term on December 31, 2024.

At the time of his appointment to the bench, Justice Jenkins was a member of the United States House of Representatives, to which he was elected in 2014 and re-elected in 2016, to represent the citizens of West Virginia’s Third Congressional District. For four years he served on the House Appropriations Committee and most recently as the Vice-Chairman of the Commerce, Justice and Science Sub-Committee. He previously served three terms in the West Virginia House of Delegates, beginning in 1995, representing Cabell and Wayne counties, followed by three terms in the West Virginia Senate, from 2003 to 2014. Before his election to Congress, he was executive director of the West Virginia State Medical Association, general counsel of the West Virginia Chamber of Commerce, and taught business law at Marshall University. Justice Jenkins was admitted to the practice of law in West Virginia thirty years ago and began his legal career as an associate attorney with the Huntington law firm of Jenkins Fenstermaker, PLLC in 1988.

Justice Jenkins is a native of Huntington. He has a bachelor’s degree in business administration from the University of Florida and a law degree from the Cumberland School of Law at Samford University. Justice Jenkins and his wife, Elizabeth, live in Huntington where they raised two sons and a daughter. He is active in the community as a member of the First Presbyterian Church and has served as a volunteer leader for the American Red Cross, Boy Scouts of America, Big Brothers Big Sisters of the Tri-State Area, Foundation for the Tri-State Community, Foster Foundation, and Lily’s Place, a nationally recognized facility that cares for newborn infants suffering from drug exposure during pregnancy.